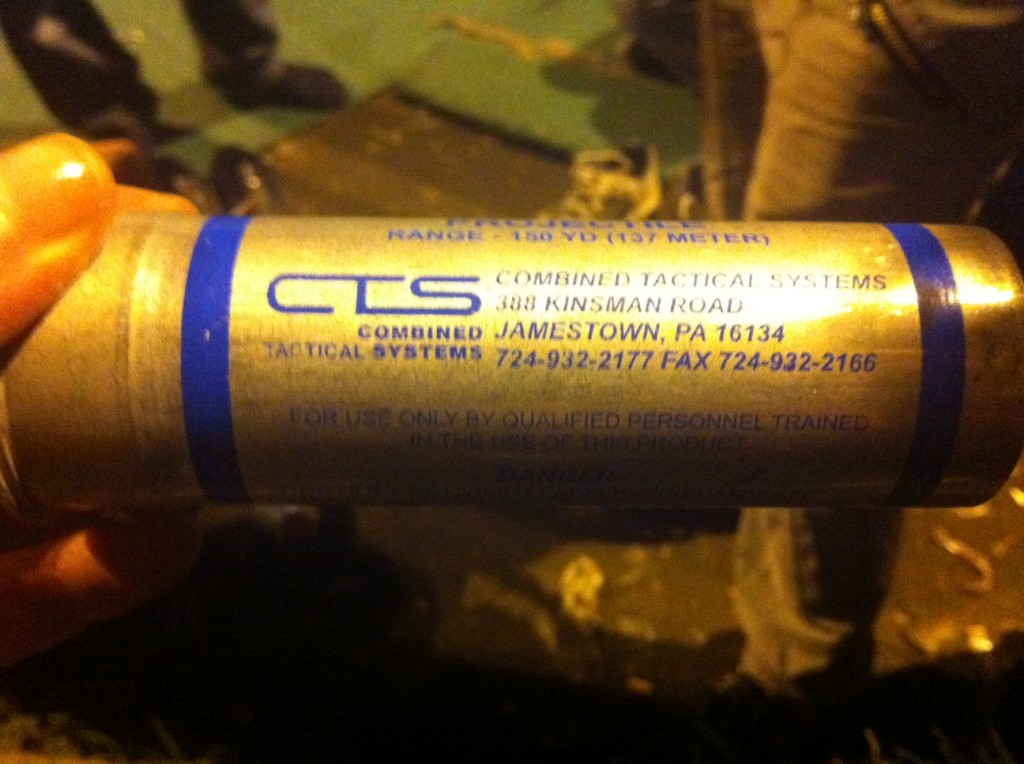 The deaths of protestors at the hands of Egypt’s military have focused attention on US shipments of arms, including “less lethal” tear gas. From Cairo. Alix Dunn argues that so far business actions are speaking louder than diplomatic words.

Successive speeches by US officials about the “legitimate aspirations of the Egyptian people” have increasingly bent towards support for nascent pro-democracy movements. While on the battleground that the streets of Cairo have become, little attention is paid to high-level diplomacy, people do take notice when the hard power and muscle of violent crackdowns clearly and literally displays “Made in the US.”

The tear gas used by the Egyptian riot police appears to be made in Pennsylvania by Combined Tactical Systems and is classified as a “less-lethal” munition by the company. Yet, its use by Egyptian security forces has allegedly resulted in the asphyxiation of peaceful protestors. This lethal use of tear gas has been documented by Amnesty International, and the human rights advocacy organization has campaigned heavily to raise awareness about the misuse and pressure the U.S. government to address this. The company has yet to respond to theses reports.

The overarching legal question that this raises is what responsibility does a company – in this case, Combined Tactical Systems (CSI) – have when a product is used in a manner that violates the human rights of others?

The US State Department and the US Department of Commerce issue licenses to CSI to permit the direct sale of non-lethal munitions to the Egyptian government. This licensing process, whereby a company must receive permission from the US government to sell such “less-lethal” munitions to foreign governments, is the perfect opportunity for U.S. authorities to act to protect against potential rights violations or to respond to events on-the-ground where licensed products are deployed.

The UN Guiding Principles on Business and Human Rights make clear that states have a “duty to protect” human rights, including the deployment of domestic regulation where it has jurisdiction. Similarly, the UN GPs make clear that it is the responsibility of businesses to consider the end use of products as part of its “due diligence”. In the case of CSI, this means that when a product is sold as a non-lethal munition, is used lethally, and CSI continues to sell it, the company is open to allegations that it is in violation of these international standards.

It is critical that transnational regulatory structures and human rights frameworks are activated to prevent profit in the business of rights violations. As with all international law (particularly in the case of human rights law) the devil is in the details of enforcement. But where it is clear that the intent behind the use of these “less-lethal” munitions is misaligned with the stated use, this should at least trigger some sort of review process, both at the US federal level and at the level of the United Nations.

While the U.S. State Department issues statements about the appropriate role for Egytp’s Supreme Council of the Armed Forces in the transition, corporate relations between business and the regime reveal themselves through the end-use of U.S. products. Those occupied with high diplomacy and the long-range rhetorical work to reboot and realign relationships in the new geopolitical landscape of the Middle East should make no mistake: as long as hard power is clearly labeled as Made in the US, speeches are likely to be a waste of time.