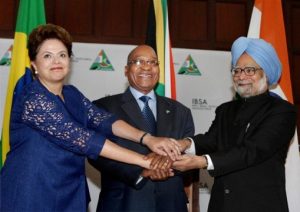 On the heels of a report to the UN Human Rights Council detailing widespread human rights abuse in Syria, attention will no doubt return to the Security Council in New York. LoR Contributor Graham Usher reports that the so-called emerging powers on the Council have yet to bring a new perspective on human rights.

New York – The apparent failure of the Arab League initiative to resolve the Syrian crisis means the issue may soon return to the Security Council. Will it suffer the same fate as it did in October?

Russia and China then vetoed a resolution tabled by European states threatening only the consideration of sanctions should Damascus continue repressing its people.

The opposition was in many ways a holdover from the cold war. Both Moscow and Beijing have long viewed any western-led intervention – including sanctions – as a violation of national sovereignty, especially when used against “friendly” states like Syria.

Western states on the other hand – especially since the cold war – see sanctions and “humanitarian” interventions as legitimate means to weaken and ultimately oust recalcitrant regimes.

Libya – and the toppling of the Gaddafi regime by NATO-protected rebels – was thus deemed a “successful” intervention by states like France, Britain and the United States: Syria – and the immunity the Assad government has so far enjoyed from UN imposed penalties –a victory by Russia and China.

But where do the so-called emerging powers stand on this rift between sovereignty and interference?

As regional democracies committed to human rights, India, Brazil and South Africa (IBSA) may have been expected to side with the west. In fact – in the year or so since all three have been on Council – IBSA has evolved into an opposition to all forms of outside interference, especially when it comes to crises born of the Arab uprisings like Libya and Syria. Why?

One reason is the legacy of a non-aligned foreign policy. While supporting human rights and democracy in general, IBSA are loath to single-out countries for human rights abuses.

Another reason is history. For India, Brazil and South Africa – all nations forged from struggles against colonialism or neo-colonialism – any foreign intervention casts a shadow of western imperialism.

But the main reason for IBSA’s hostility is Libya.

All three countries felt queasy about a Security Council resolution in March authorizing military action to protect civilians in Libya. South Africa reluctantly voted in favor. With Gaddafi’s troops massing outside Benghazi, the fear was of “another genocide” in Africa, said ambassador Baso Sangqu.

But Pretoria – like India, Brazil, Russia and China, all of which abstained on the resolution – rapidly saw a UN mandate to protect civilians manipulated as legal cover for a western-led military campaign of regime change. NATO became “the armed wing” of the Security Council, India UN ambassador Hardeep Singh Puri, told the BBC.

Suspicion of western intentions has shaped IBSA’s response to Syria. The resolution in October carried no sanctions, made no referral to the International Criminal Court and ruled out any Libya-style intervention. Yet IBSA sat on its hands, in effect supporting the Russian and Chinese vetoes.

“The trajectory, the template for the solution (in Syria) was very clear. It was along similar lines to Libya,” Ambassador Sangqu told the BBC. Western capitals were calling for Bashar al Assad’s ouster and, in private conversations, refused to rule out future military action, he added.

Has anything changed? On 22 November European countries tabled a resolution condemning human rights abuses in Syria in the Human Rights Committee of the General Assembly. It was passed by 121 votes to 13, with the so-called new Arab democracies of Tunisia, Egypt and Libya all voting in favor. Brazil also voted for.

But Russia, China, India and South Africa abstained. And most read this as a sign not to expect any dramatic change on the Security Council should a resolution on Syria again come before it.

In theory this would walk a middle path between western states’ propensity to intervene and Russia and China’s defense of sovereignty no matter what that sovereignty does.

In practice the Arab league plan is close to expiry. And Arab states like Qatar and regional ones like Turkey are calling for “urgent measures” to protect civilians even while warning against “all foreign intervention” in Syria.

IBSA on the Security Council has been very good in alerting the world about the dangers of the latter. It has less good at suggesting how – short of outside intervention – civilian protection can be achieved against violent, authoritarian regimes.

“IBSA has not only failed the Syrian people,” says Philippe Bolopian, United Nations Director of Human Rights Watch. “It also failed to offer a credible alternative path to end the bloodshed”.