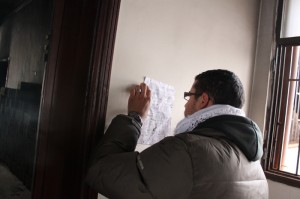 ICC Chief Prosecutor Luis Moreno-Ocampo flies to Tripoli today, in the midst of a debate over where to try Saif al-Islam Gaddafi.

Libyan Prime Minister Adurrahim al-Keib promised that the former heir apparent to Muammar Gaddafi would get a fair trial at home. Others, like Amnesty International, are calling for Gaddafi – and his co-accused, former intelligence chief Abdullah Sanussi (if reports of his capture over the weekend turn out to be accurate) – to face a court at the ICC in The Hague.

There are good arguments both for and against shipping Gaddafi and Sanussi to The Hague. Normally, if the Libyan authorities decided they wanted to try them, the ICC’s Prosecutor would not have jurisdiction. That’s because according to the Rome Statute of the ICC, the jurisdiction of the court is complimentary to any state which has jurisdiction, in this case Libya.

Unfortunately, it may not be so simple. The intent of the Rome Statute’s provisions on jurisdiction are clear: where states are taking real and verifiable steps to prosecute, state sovereignty trumps the jurisdiction of the Court. In ruling on the Prosecutor’s application for a warrant in the Gaddafi case, the ICC’s Pre-Trial Chamber I granted jurisdiction on the basis of the Security Council referral. But it accepted the admissibility of the case (a separate issue from jurisdiction) on the grounds that “there are no ongoing investigations or prosecutions by any State in relation to the conduct that forms the subject of the Prosecution Application” (No.: ICC‐01/11 Date: 16 May 2011).

Clearly, that is about to change and, when it does, the admissibility at the ICC of the case against Saif al-Islam will no longer be so certain.

Questions of admissibility have come before ICC judges before. Kenya challenged the admissibility of charges against certain of its citizens in connection with the election violence of 2007-2008 by arguing that they were investigating the same crimes. The Pre-Trial Chamber rejected that challenge earlier this year, sensing an attempt by Kenyan authorities to get certain ICC defendants off the hook (the court seemed to feel that Kenya was investigating the same crimes as the ICC but possibly not the same alleged perpetrators). (No.: ICC-01/09-01/11 Date: 30 May 2011)

There is no indication the Libyan government will want to let Gaddafi and Sanussi off the hook. Quite the contrary. But the lesson is that if the government wants to keep them in Tripoli, they’d better start a credible investigative and judicial process soon. (Update: Moreno-Ocampo confirmed this in a statement released 22 November as he flew to Tripoli, adding “The issue of where the trials will be held has to be resolved through consultations with the Court. In the end, the ICC judges will decide, there are legal standards which will have to be adhered to.”)

The fact is that both the ICC and Libya have jurisdiction, and both jurisdictions have constraints on how hard they push back against the other. The government of Libya is facing very real constraints imposed by the Security Council. Equally, the ICC Prosecutor travels to Tripoli this week, not to dictate, but to haggle.

Ultimately, there may be the need for a compromise solution: an internationalised domestic court – along the lines of Sierra Leone or Cambodia – might be the best way to avoid years of legal wrangling and to ensure justice is swift and fair.

Gaddafi’s security headquarters was overrun on February 20. Inside, rooms bore signs of a hasty retreat: personal effects and routine paperwork were scattered across desks and the floor; office equipment lay strewn across staircases. Fires had destroyed some documents, but activists recovered others, including this soggy list bearing the names, titles and phone numbers for high-ranking security directors from eastern Tobruk to Sirte, a Gaddafi stronghold several hundred kilometers west of Benghazi.