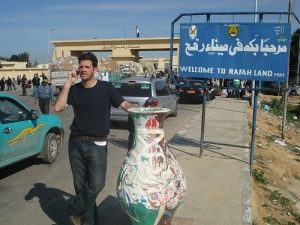 The diplomatic silence in New York is deafening. After conceding the defeat last week of their attempt to get the Security Council to grant Palestine full membership status at the United Nations, the Palestinian delegation is apparently…well, what are they doing?

Since it was apparent from the start that the Security Council was a long shot (due to US opposition), the two alternatives in the state recognition strategy have been just as obvious: seek Observer State status via a vote in the UN General Assembly (which they would be sure to win) and rack up a list of member state recognitions at UN agencies and other international organisations.

It had seemed that was precisely what Palestinian diplomats were up to. As the Security Council shunted their application into committee, they pursued – and won – membership status at UNESCO in Paris at the end of October.

But that’s been about all. As Graham Usher reports, there’s not even been an effort to spin the membership bid into the Arab Spring movment. Meanwhile, in New York, the Palestinian delegation at the GA has been noticeably inactive in recent days. According to an observer close to the UN in New York, the word amongst diplomats is that the Palestinian delegation is under orders to do nothing to prepare a GA vote on observer state status.

There are several possible reasons for this, all of which may have grains of truth (observers of Palestinian politics tell LoR that decision-making by Palestinian Authority President Abbas – Abu Mazen – is so unpredictable that it is difficult to identify a single logic at the best of times).

One is that there are real divisions amongst the Palestinian leadership over when and how to go to the GA. This is almost certainly the case. Still, it doesn’t account for the full stop that appears to have been called in Palestinian diplomacy in New York.

Another is that Abu Mazen cannot afford to go to the GA until there is a clear rejection by the Security Council. If he moves too soon, he risks appearing to undermine or abandon the Security Council bid for full membership. Although this would be technically incorrect, the perception among Palestinians might be that he is caving in to US and Israeli pressure. In short, he needs the Security Council rejection before he can move forward at the GA.

The more likely version is that Abu Mazen has decided to do nothing at the GA at any time in the foreseeable future in the hopes that US pressure will ease up and Israeli tax transfer payments will start to flow again.

The logic of this version, according to one observer close to the UN, is that real fight was always going to be over Observer state status. Israel, like everybody else, knew the US would veto full status if necessary and so has focused its energies (and its sanctions on the PA) in an effort to preempt any move to seek observer state status at the GA.

What is beyond doubt is that if the GA votes to accord it the status of an Observer state (which the Vatican is today and which Switzerland was until 2002) it will be far easier for the Palestinians to get status at the International Criminal Court, or accede to the Geneva Conventions. Since Operation Cast Lead, Israeli diplomacy has been focused on pushing back attempts to hold Israeli commanders accountable in various jurisdictions in Europe. Anything which increased the likelihood that the ICC or other courts might be able to assert jurisdiction over the conflict would no doubt prompt an, uh, vigorous Israeli preemptive effort.

Meanwhile, in Ramallah, the fiscal disaster now looming is a direct result of Israel’s suspension of tax transfer payments to the PA, a move it took in response to the statehood bid at the UN. Now, renewed talk of the collapse of the PA promises to re-ignite internal Palestinian debates about Abu Mazen’s leadership and about strategy.

By doing nothing at the GA, Abu Mazen allows pressure on the US to lift (at the UN, they are isolated on this issue), signals to the US and Israel that he is feeling the pain of their fury over the UNESCO move and their sanctions (which he is), and that he may be willing to be coerced back into line.

As if to confirm all of this, today Palestinian officials are busy denying reports that the Palestinians have offered to drop the bid for full membership in exchange for the resumption of transfer payments by Israel.