In Tahrir square today, people are taking to the streets to confront Egypt’s criminalization of protest. LoR contributor Yasmine Gado writes from Cairo on the background to today’s protests.

On Saturday, 11 September Egypt’s interim ministerial cabinet announced its decision to expand and reactivate Egypt’s Emergency Law that had been in effect during Mubarak’s entire 30-year rule. 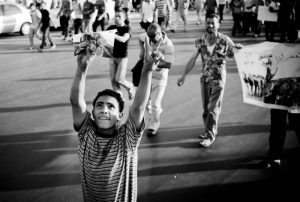 The announcement came two days after a demonstration at the Israeli embassy in Cairo in which protesters scaled the building, removed the Israeli flag for the second time this month, broke into the embassy and dumped documents from its archives out of the window.

Political and civil movements and parties have called for a “Friday of No Emergency Law” million-man protest in Tahrir today to contest the expanded law. At issue is the widespread use of at least two court systems used by the government to target activists, both of which put the new Egyptian regime squarely on the wrong side of international human rights law.

Use of Military Trials

On 1 March, the SCAF expanded the scope of the Emergency Law to allow military trials to be used to try cases of alleged “thuggery,” defined as “displaying force or threatening to use force against a victim” with the “intention to intimidate or cause harm to him or his property.” However, “thuggery has since been interpreted much more broadly to include breaking curfews, possessing illegal weapons, destroying public property, theft, assault, or threatening violence — in short, a wide variety of activities that grant the military maximum discretion for locking up civilians.”

The first official figures indicate that 11,879 civilians have been tried before military tribunals between 28 January and 29 August. (By comparison 2,000 people were sentenced by these courts during Mubarak’s 30-year rule). The military courts have convicted 8071 people, including 1836 suspended sentences, and an additional 1225 convictions are awaiting ratification by the military. With only 795 of the nearly 12,000 cases ending in acquittal, the conviction rate is 93 percent.

This is not surprising when the trials appear to be rigged to ensure convictions. An activist who was arrested in May and later released described his trial:

“During interrogation, the prosecutor took out a lawyer’s ID and wrote down the lawyer’s details and registered him as been present next to me while he directed the accusations. This was his way to give the impression that law (requiring counsel for the defense to be present) was being upheld.

“Something else, during the court session, we were about 60 defendants. The procedure (for entering a plea) would normally be that each one of us should be asked individually by the judge about the accusations directed at us and we should either confirm or deny. In this case, the judge … asked all of us at once and got a collective “no we deny”.”

According to Human Rights Watch, defendants in Egyptian military courts usually do not have access to counsel of their own choosing; counsel is often not present during the trial; defendants are tried in large groups with dozens of other defendants in trials that may last less than 30 minutes; and judges do not respect the rights of defendants. “Judges in the military justice system are military officers subject to a chain of command and therefore do not enjoy the independence to ignore instructions by superiors.” Most egregiously, the verdicts may only be appealed on procedural grounds.

At last Friday’s demonstration in Tahrir protesters voiced anger over the practice of trying civilians in military courts and called on the SCAF to end the practice. Speaking from Tahrir’s main stage, legal activist and former MP Gamal Zahran said “Military trials are an infringement on the rights of Egyptians, and must end immediately.”

On Wednesday this week, the interim Cabinet announced that some cases of blocking roads and transportation, terrorism, arms and drug dealing, public property vandalism and, of course, ‘thuggery’ will now be referred to State Security Emergency Courts. The cabinet said the decision was taken to allow citizens to be tried before civilian judges instead of being referred to military courts. (This reverses an earlier statement by General Adel al-Morsy, head of the Military Justice Commission, who had said that that the government would stop trying civilians in military courts only after it scrapped the Emergency Law ahead of the parliamentary elections scheduled for November.)

But human rights lawyer Maha Ma’moun of the Front to Defend Egypt’s Protesters claims the change is largely cosmetic: “State Security Emergency Court is an exceptional court. Maybe its investigations are more thorough than those in military courts, but verdicts are still issued quickly, and appeals take time to investigate.”

If the State Security Emergency Courts fail to deliver on due process, it is unlikely that Egypt will avoid international condemnation in the future. Human Rights Watch objects to “any trials of civilians before military courts, where the proceedings do not protect basic due process rights and do not satisfy the requirements of independence and impartiality of courts of law” and argue that that military trials violate Egypt’s obligations under international law:

As a state party to the International Covenant on Civil and Political Rights (ICCPR), Egypt must ensure that people charged with criminal offenses have the right to a fair trial. Article 14 of the ICCPR requires “a fair and public hearing by a competent, independent and impartial tribunal established by law and the right to review of any conviction and sentence by a higher tribunal. Egypt’s military tribunals do not meet these core standards …. The United Nations Human Rights Committee – the body authorized to monitor compliance with the ICCPR – has stated that trials of civilians by military courts should be very exceptional and occur only under conditions that genuinely afford full due process. Under changes to Egypt’s Military Justice Code issued in April 2007, those convicted may appeal the ruling within 60 days, but only on procedural grounds.

How long until a similar analysis is made of the State Security Emergency Courts? How long until Egypt stops criminalizing democratic protesters?