The legal advisors of foreign ministries around the world months ago advised their political bosses that the Palestinian bid for membership at the United Nations is unproblematic. Legally.

Palestine certainly meets the standard criteria for recognition as a state (see the 1933 Montevideo Convention on the Rights and Duties of States or this excellent summary in the Yale Journal of International Affairs by By Iain Scobbie, Alon Margalit and Sarah Hibbin). The basic criteria – defined territory, permanent population, government and the capacity to enter into relations with other states – are at least as applicable to Palestine as they are to, say, South Sudan, which the Council and the GA admitted as a member of the UN in July of this year. 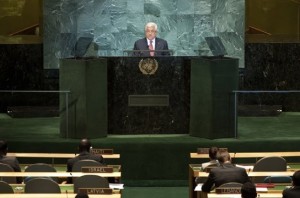 The opposition of the Obama Administration is entirely political. The US is not questioning the international law merits of the case Palestinian President Mahmoud Abbas will take to the Security Council this week. It would be hard for the US to do so. After all, the US, EU, Japan, China, Arab countries and many others have pumped billions of dollars, and huge amounts of political and diplomatic capital, over the better part of two decades, supporting the very building of the State of Palestine, the UN membership of which the US now opposes. At the same time, over 120 states have actually formally recognized the state of Palestine and set up diplomatic relations with it.

Rather, the US argues, statehood for the Palestinians should come through negotiation between the two sides, a line parotted by Quartet Envoy Tony Blair.

On its face, this appears to be an eminently sensible position. After all, there is a conflict at issue, right? Has negotiation between the parties not been the basis for the peace process until now?

That, of course, is precisely the problem. Since 1993, when the Oslo Accords established a less-than-sovereign entity under Israeli occupation in the West Bank and Gaza, the stage was set for almost two decades of on-again, off-again peace talks aimed at ending the conflict through a two-state solution. Throughout, the US, Israel, donor countries and their Palestinian allies – President Mahmoud Abbas at the forefront – have insisted that the peace process is the only path to self-determination.

But that process failed. Long ago. And the result has been a decade of rising violence. The peace process between an “entity” (the PA and rump PLO, take your pick) and the government of Israel actually results in the eruption of ever-worsening violence every half-decade or so.

So it is fair to ask whether negotiations between sovereign states, governed by international law, might not fair better, especially when one side is far weaker than the other and can avail themselves of the various international legal instruments available, not least UN resolutions pertaining to territory and refugees, the ICJ and the ICC.

The Israeli insistence on a contradiction between UN membership (and the statehood it implies) and a continued commitment to the peace process holds no water at all. The Palestinians continue to argue that they are committed to a negotiated peace with Israel. Israel (already a member of the UN) makes the same claims. There is nothing about UN memership, or statehood for Palestine, which undermines the peace process. Quite the contrary.

Legacy aside, a diplomactic success at the UN would help Palestinians outflank those in the ranks of Hamas and The Fatah movement who argue that the lack of progress in talks with Israel, and the continuing construction of Israeli settlements on Palestinian land, demand a return to armed struggle. By creating the legal fact of sovereignty, it would increase the pressure on Hamas’ more radical factions to relate to Palestinian politics directly. It could even dampen the likelihood of violent Fatah – Hamas competition that elements on both sides are spoiling for.

Similarly, access to the International Criminal Court would give Palestinian democrats an international forum to shame the demogogues of both Israel and Palestine for their tendency to fight for political advantage through devastatingly pointless military campaigns targeting each other’s citizens.

As anyone following the process closely will tell you, there has been no progress for many years. This is because, to put it simply, there is no deal to be made. Both sides have been beholden to deeply depressing internal politics beset by corruption and extremism. It is the worst kept secret of the Middle East that for years now neither leadership has been in any position to deliver on an agreement, even if they wanted to (and elements on both sides do not want to).

And thre is no third party capable of knocking heads together. The US has made clear that it opposes the Palestinian bid, and it will certainly veto it, as if we needed yet more evidence of growing American weakness in the region; or yet another debacle for American diplomacy, one driven by domestic political dysfunction. It is hard not to see the parallels to the other ‘big’ issue this summer, S&P’s downgrading of the US debt rating from AAA to AA+. Just as that was a vote of non-confidence – not in the US economy – but in American decision-making about the economy, the Palestinian decision to go ahead with the UN bid is their way of saying that, although the US remains crucial to regional stability, there is much that the politics of Washington D.C. cannot do. And among those undeliverables are an end to Israeli settlement construction or pressure on any Israeli government to offer a final status agreement that even approaches the Palestinian bottom line (if there are any doubters on this point, Henry Seigman’s brilliant and impassioned piece in Foreign Policy is recommended).

Clearly, it is time to try something else.