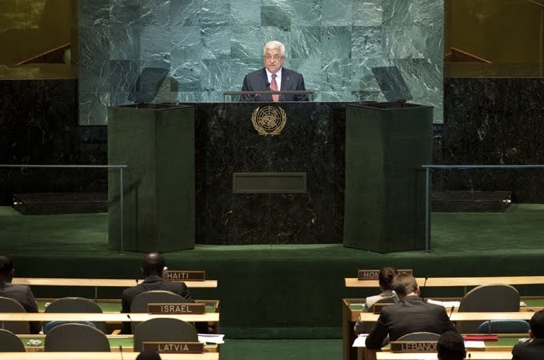 LoR contributor Graham Usher reports from the UN in New York that the Palestinian drive to upgrade its status at the UN this month has raised questions about the democratic basis for statehood.

Later this month the Palestinian Authority may request to become a member state of the United Nations and/or seek an upgrade in its UN status from observer to non-member state in the Palestinian territories occupied by Israel in the 1967 war: Gaza, the West Bank and East Jerusalem.

Within the PA leadership the debate is whether to go for one or both options or abandon them in the face of potentially punishing American and Israeli opposition and European ambivalence.

Among Palestinians, especially the majority who live outside the occupied territories as refugees, another debate has simmered – over the effects of the move at the UN on their rights as refugees.

The debate has been stoked by a legal opinion submitted by Guy Goodwin-Gill, an expert in international law at Oxford University. Goodwin-Gill flags two warnings: will the substitution of the Palestine Liberation Organization by a State of Palestine at the UN weaken the former’s status as the sole legitimate representative (SLR) of the Palestinian people wherever they reside? And, if so, what will be the impact on the refugees right of return to homes and properties in what was Mandate Palestine but is now Israel?

“Historically the PLO has been the sole legitimate representative of the Palestinian people, internationally and within the UN. Now it is to be a state. Who, though, is the state, and what are the democratic links between those who will represent the state at the UN and the people of Palestine? An abstract entity – a state – is proposed, but where are the people?” asks Goodwin-Gill.

Those kinds of questions have caused discord. Palestinian refugee activists have demanded “clarity” from the PA that any move to a member or observer state at the UN will not harm the PLO status as SLR or Palestinian refugee rights. PA president Mahmoud Abbas has assured everyone that it won’t.

The “PLO would continue to function (as SLR) until all Palestinian issues are resolved, including the case of the refugees. The PA is part of the PLO and not a separate body,” he told Al Dustour newspaper in Jordan, a country in which Palestinian refugees are the majority.

Abbas’ opinion is backed by a 7-page memo by the PLO-Palestine UN Mission, with legal arguments insisting that the PA’s “September initiative” prejudices neither the PLO representative status nor the right of return.

It has also been echoed by Frances Boyle and John Quigley, two experts in international law. Boyle helped draft the PLO’s 1988 Declaration of Independence, the document that for the first time sited Palestinian self-determination as a state on the 1967 occupied territories.

“The executive committee of the PLO in its capacity as the provisional government will continue to represent all Palestinians around the world when Palestine becomes a state. No one will be disenfranchised. The PLO will not lose its status”, he says.

In fact – adds Quigley – the rights of Palestinians everywhere will be strengthened by the UN move.

“If Palestine were to become a (UN) member state … it would be able “to pursue remedies at the diplomatic level as a state … It can also pursue prosecution of Israeli officials for war crimes, such as settlements, putting pressure on Israel on an issue that has been the principle obstacle to a peace settlement … Rather than posing a threat to refugees, the refugees will in fact be in a much stronger position”.

Quigley says uncertainty has been caused by the fact that it is “the PA who is putting the (UN) bid forward” rather than the PLO. It is this confusion that is the real crux of the debate, say Palestinian commentators.

In theory, the PA is a “subsidiary” of the PLO. In practice, however, since the 1993 Oslo accords and especially the PA’s establishment in 1994, it is the PLO that has become the subsidiary, transferring most of its departments, functions and personnel to PA areas inside the occupied territories.

To make matters murkier, even his representative status is dubious. His tenure as PA president expired in 2010. And, absent new elections, the PA government that could have extended it was dissolved by him after the 2007 Palestinian civil war that divided the PA into an Abbass led authority in the West Bank and a Hamas authority in Gaza.

The Islamist Hamas movement had been the PA government prior to the dissolution, following their win in parliamentary elections in 2006. Hamas is the de facto Palestinian authority in Gaza. It is not part of the PLO, does not recognize Abbas’ legitimacy as PA president and dismisses the UN move as a “political scam”.

Goodwin-Gill’s flag of warning is less about whether a change from PLO observer to a Palestine member or observer state would harm Palestinian rights. All the legal arguments suggest it would not: it may even strengthen them. It is rather about under what authority does an unelected leadership – confined to one part of the occupied territories – have to change the status of Palestinian entities at the UN or anywhere else. Says Goodwin-Gill:

“Does the PA have the power to move the issue of statehood ahead, and, if so, what are the origins and parameters of that power? Have the people of Palestine, through their representative – the PLO – granted such power? I recognize there is an urgent, pressing need for statehood, particularly in the face of the intransigence of other parties, but I am also concerned that the essentials of modern statehood – democracy, representative government and accountability – may be sidelined, if not sacrificed, perhaps to the long term disadvantage of the people at large”.