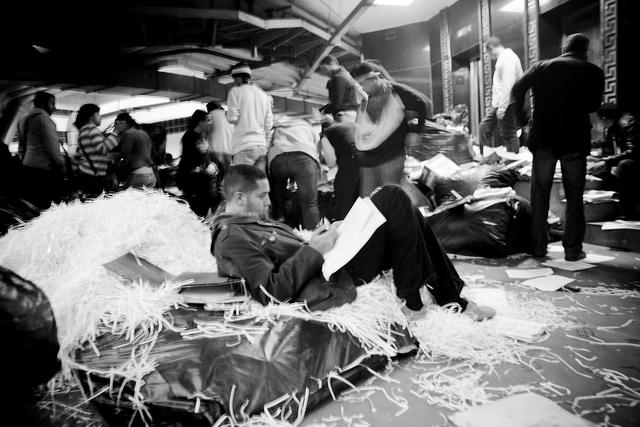 Businesses exist and operate at the discretion of the state, presumably under the rule of law. So, when a government tells a phone company to deny customers mobile service, or an internet service provider to pull the plug, or a software company to design a programme to block certain web sites, those businesses have no option but to comply.

The issues have been hotly debated recently in relation to phone company responses to the Egyptian revolution. Most recently, Vodafone has been targeted by Egyptian activists, but even early on commentators like Salil Tripathi at the Institute for Business and Human Rights were laying out the issues.

But this week there emerged a new case from Egypt, when Egyptians expressed anger at a decision by the country’s High Administrative Court to let companies off the hook for the widespread shut-down of telephone and internet communications during the 25 January revolution. For their part, the companies say they had no choice, referring to Egyptian telecommunications law giving the government the right to cut the lines for reasons of national security.

The Court’s decision confirmed fines of over US $90 million against former President Mubarak and his cohorts for issuing the orders for the shut-down. In deciding not to penalize companies , the court opened the way for the Minister of Communications and IT to announced US$ 16 million in compensations for telecom companies affected by the government’s actions.

Many Egyptians were livid, arguing that those who aided and abetted the regime’s crack down should not go unpunished. As one news report put it,

“According to a summary of the verdict issued by the High Administrative Court on Sunday and obtained by Ahram Online, the decision to cut telecommunications was not made “spontaneously” or “overnight,” as authorities have claimed.

Rather, the court said, “as early as April 2008 the ministries of interior, telecommunications and mass communications, in association with telecom companies and internet providers operating in Egypt, conducted a series of experiments to practice how to cut connections.”

The first experiment was conducted on 6 April 2008, significant in that it was a day when workers in the industrial Delta city of Mahalla began a major strike over work conditions that escalated to chants against Mubarak, taboo at the time. Mubarak’s security forces cracked down violently on the strike using rubber bullets, tear-gas, and live ammunition, leaving two dead and hundreds injured. Eight hundred activists and workers were detained that day.

The ministry of interior established an emergency room in Ramses Central and practiced how to cut off internet by city and governorate, how to block particular websites, obtain user information and how to shut down mobile phone and bulk-SMS services. They aimed to ensure the telecommunications companies could respond quickly to requests by security.

The second experiment was conducted in October 2010, with a simulated emergency room which experimented on how to deal with technology in the case of mass uprisings.

All of these experiments were conducted in coordination with the telecom companies.”

Without being able to comment on the specific facts in this case (and I have not seen a translation of the court’s decision), and despite the apparent exoneration of companies by the court, the news report indicates the court made findings that any company would have to take seriously: namely that there was a longer-term relationship between some companies and government security forces and that that relationship was for the purpose of silencing dissent or cracking down on opposition (after all, that was the mission of the security services at the time).

Both of these suggestions matter. In general, companies involved with state security forces tend to argue they either had no choice, were unaware of government intentions or both. This can often be the case. But that defense starts to wear thin when longer term relationships are involved, or when products or services are designed to meet a government’s repressive intentions. Participating with agencies in planning illegal activities could be evidence of a common purpose, the kind of legal test courts in many countries apply when trying to decide liability. Participation could also be evidence of intent or knowledge (mes rea) where knowingly providing practical assistance or encouragement that has a substantial effect on the commission of a crime is the basis for culpability as an accomplice (read ‘corporate complicity’).

Hussam Youssef, lawyer and coordinator of the Egyptian Coalition for Human Rights (ECHR), says companies “were partners in implementing the government’s decisions.” If there is good evidence to back up this allegation, companies can expect further law suits, including civil actions in their home jurisdictions or in US courts.

These kinds of civil actions will no doubt seem unfair to businesses who think it is their responsibility only to abide by the law of the countries in which they operate. Yet, that obligation has never been a solitary one.

The Guiding Principles on Business and Human Rights which the UN Human Rights Council is likely to endorse this month in Geneva, codify in soft law the notion that business has a responsibility to respect human rights that is independent of government fiat. Governments have a range of tools they can use to regulate, constrain, or otherwise cajole business to do their bidding. But in doing so business has the independent responsibility to evaluate the legal and ethical implications of its own activities, through a process the Guiding Principles call “due diligence”. To fail to do so exposes the business to the risk of liability, in the absence of other forms of remedy.

But civil actions against corporations are horribly difficult for victims to mount, let alone win. And therein lies the present source of the business and human rights problem: remedy. Most states simply do not have accessible remedies for these kinds of harms. So far, many have neglected to put in place mechanisms that might provide access to justice for victims of human rights abuses by those companies that governments are busing trying to woo or promote.

Under the Guiding Principles, formulated by Harvard Professor John Ruggie after many years of consultation and research, knowingly helping a government to target democratic opposition groups would almost certainly constitute a breach of a company’s responsibility to respect human rights. But there are few remedies for such a violation.

As long as that remains the case, the law suits will keep on coming. This is very far from over.

The title of this post is an attempted homage to Gil Scott Heron, who died this week. A real loss.