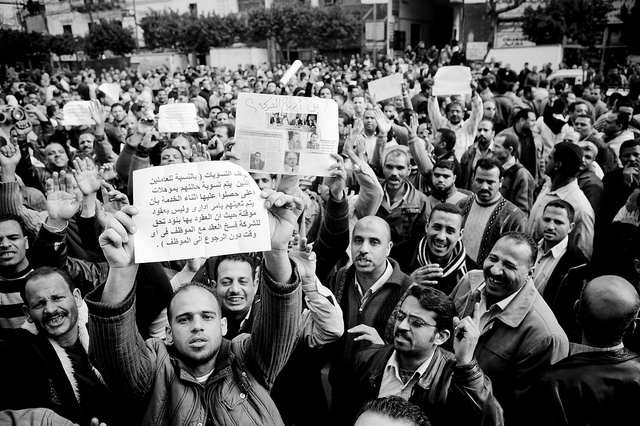 The struggle over trade union legitimacy in Egypt is moving into the Courts. An Egyptian Administrative Court announced over the weekend that it will hear arguments on 14 June in a move to dissolve the Egyptian Trade Union Federation, the state-controlled trade union which dominates public sector union membership in the country.

The action has been taken by representatives of the free trade union movement in Egypt, not least Kamal Abbas and his colleagues at the Center for Trade Union and Workers Services (CTUWS). LoR has received the a translation of the complaint and you can read it here:

To Public Prosecutor to dissolve the Egyptian Trade Union Federation

The filing for dissolution of the state controlled unions comes in the wake of a decision by the governing State Council of the Armed Forces to not reform the laws governing trade union membership and keep the Egyptian Trade Union Federation (ETUF) as the legal representative of all Egyptian workers. This in effect bans the formation of free trade unions.

I was in Cairo last week and attended a meeting of the Just Jobs Network where Abbas and his colleagues briefed regional and international experts on their positions, not least the role of social dialogue in pulling Egypt out of what many fear may be turning into a “revocsession”.

But their first order of business is to ensure their right to organize and their role in representing workers in collective bargaining. The law as it stands does not protect those rights and the ETUF state-controlled unions – as the only legitimate unions under the law – stand in the way of securing those rights. To that end, the legal action asks the court to

“terminate [ETUF’s] capacity as representative of the Egyptian workers in all the councils, organizations and forums, dissolve and dismantle its present structures and put its funds under receivership in order to be protected and managed until the organization to which these funds will descend is decided.”

It was clear that the free trade unionists in Egypt understand the need to work with the existing public sector unions – the latter represent hundreds of thousands of workers. But it was equally clear that they cannot imagine beginning to engage with the old state-controlled unions until there has been a thorough house-cleaning. Most trade unionists see the leadership of those unions as corrupt, yet it is those unions who represent Egyptian workers internationally.

No surprise then that another complaint was filed this week against head of ETUF, Ismail Fahmy, demanding an investigation into the ETUF’s participation at the International Labor Organization’s general assembly in May “with a delegation of 20 members and 10 journalists, all expenses paid”.