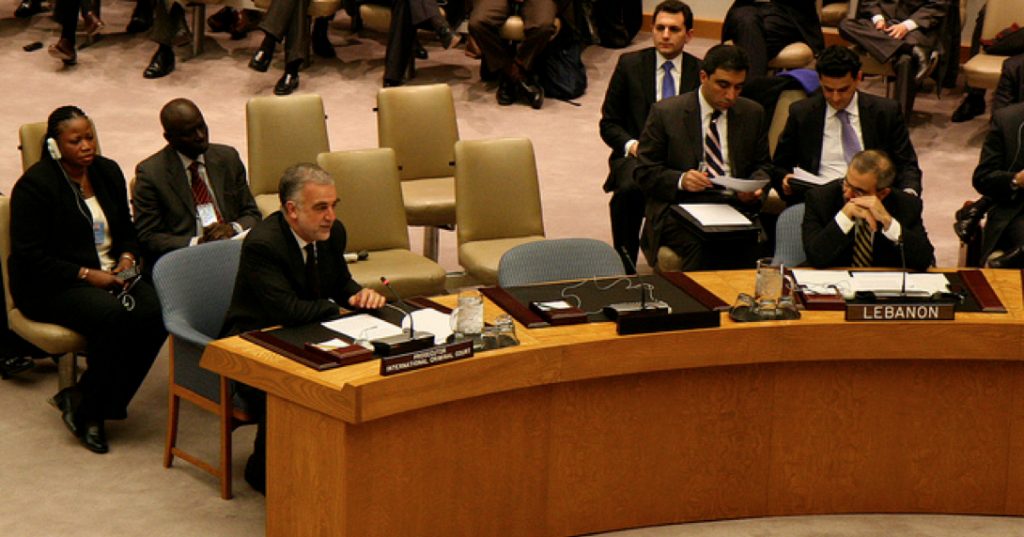 ICC Chief Prosecutor Luis Moreno-Ocampo will need more than crime scene evidence to convince judges a case can be made against those most responsible for crimes in Libya’s civil war. LoR contributor Graham Usher reports from New York.

The chief prosecutor of the International Criminal Court (ICC) on Wednesday said he had “reasonable grounds” to seek arrest warrants against three Libyans who seem to bear “the greatest responsibility” for crimes against humanity (CAH) by Moammar Gaddafi’s security forces in the Libyan uprising.

Briefing the UN Security Council (SC) in New York, Luis Moreno-Ocampo did not name the three. But they were among those who “ordered, incited, financed or otherwise planned the commission of the alleged crimes”. That suggests very senior officials in the Libyan regime, including perhaps Gaddafi, said Human Rights organizations.

Moreno-Ocampo said he was also investigating war crimes and would not rule out future cases against attacks by NATO or rebel forces in Libya. “I don’t care about the political colors. No one can attack civilians”.

For ICC judges to issue arrest warrants for CAH, violations must be systematic or widespread. Moreno-Ocampo said he had “strong evidence” of both.

“Events in neighboring Egypt and Tunisia prompted Libyan security forces to begin preparations for the possibility of demonstrations in Libya. As early as January, mercenaries were being hired and brought into Libya”.

In February – i.e. before the conflict became armed – at least 500-700 civilians were killed by government forces, said Ocampo. “The shooting at peaceful protestors was systematic, following the same modus operandi in multiple locations and executed through the security forces”.

He said rebel forces may also have engaged in “the unlawful arrest, mistreatment and killings of Sub-Saharan Africans perceived to be mercenaries.”

The SC welcomed his report, though with less zeal than when it had referred Libya to the ICC for alleged war crimes in February. Much play was made then that this was the first time the Council had unanimously referred a state to The Hague. (In 2005 Sudan had been referred for alleged war crimes in Darfur, but SC permanent members which are not parties to the Rome Statue – the US, Russia and China – abstained).

But the unanimity was only skin deep, covering a multitude of motives.

Britain and France appeared to seek ICC involvement to grant legitimacy to any future military intervention in Libya (eventually approved in a subsequent SC resolution in March). The US hoped the specter of ICC prosecution would hasten defections among Gaddafi’s inner circle and so his ouster. And Russia and China – hostile to foreign intervention just about anywhere – hoped an ICC bluff would halt the drift to war.

Three months on war has become fact, defections are few, Gaddafi is entrenched and NATO is seeking all the cover it can muster for air strikes that are legally questionable and smack of mission creep. Where there had been SC unity on Libya, now there is division.

US ambassador to the UN Susan Rice said Ocampo’s report showed “Gaddafi had lost all and any legitimacy”. Russian ambassador Vitaly Churkin said it showed “violence can only be halted through an immediate ceasefire and political settlement.” Russia has long charged that NATO air strikes exceed the SC mandate of protecting civilians.

“Divisions in the Council shouldn’t impact the ICC’s work but I fear they might,” said Richard Dicker, Director of the International Justice Program at Human Rights Watch.

This could happen should the ICC issue arrest warrants, and call on the SC to pressure the Libyan authorities to comply. That may be tricky in a Council where the US, UK and France call for regime change and the other member states don’t recognize the rebels.

Human rights lawyers are also skeptical Moreno-Ocampo’s evidence for CAH is as strong as he suggests. In New York he spoke of a “predetermined plan” decided in “meetings” in Tripoli in January to crush the uprising before it threatened the regime.

But for that to stick the prosecutor “would need more than crime-scene evidence,” said a source. “He would need insider testimony from someone at the meetings, preferably a senior official. Without that I don’t think Ocampo’s case for CAH will survive the scrutiny of the ICC judges”.

But if arrest warrants are issued, there is little the SC can do to reverse the ICC process, said Dicker. “Unlike travel bans or no fly zones, justice can’t be dialed down to suit the political needs of the moment. The Council’s unanimous referral to the ICC laid down a marker on accountability for horrific crimes in Libya and Council members are on the line to make good on it”.

Nor will the glacial spread of the ICC’s universal jurisdiction halt at Tripoli. On Wednesday UK ambassador to the UN Mark Lyall-Grant said his country supported the ICC’s mandate to fight impunity. But he wasn’t referring only to Libya.

“The violent repression (in Syria) must stop immediately,” he said. “The Syrian government has a responsibility to protect peaceful protesters, not attack them. We must be prepared to consider the appropriate avenues, including the ICC, to bring justice to the victims of these crimes”.