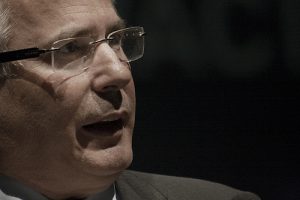 The first hearing in this case, but the second court appearance by Garzón in as many weeks, dealt with preliminary questions (cuestiones previas) including Judge Garzón’s request for summary dismissal of the case against him. Garzón’s defence lawyer argued during the preliminary phase of the proceedings that the writs of accusation lacked the minimum legal requirements and should have been rejected in the first place. They were not. Instead, Supreme Court Justice Luciano Varela gave Garzón’s accusers an opportunity to revise their writs, a procedure not foreseen under Spanish law. Varela’s action, argued Garzón’s lawyer, implies the proceedings should be annulled.

Garzón also alleged that by instructing the two organisations bringing the private accusation as to how better to formulate their complaint, Justice Varela showed bias. This, according to Garzón’s attorney, breached the principle of equality of arms.

In fact, the State Prosecutor (Fiscalía) supported Garzón’s request for the annulment of the trial. Prosecutor Luis Navajas, a veteran of cases before the Supreme Court, told the court that in 36 years of practicing law he had never seen a decision like that of Justice Varela’s admission of a defective accusation. In addition, former prosecutor Carlos Jiménez Villarejo described the trial as an enormous outrage, declaring that the case against Garzón was itself a violation of human rights.

The charges against Judge Garzón are brought by two organisations, Manos Limpias and Libertad e Identidad, who allege Garzón is guilty of judicial malfeasance, specifically for breaching the Amnesty Law, for violating the principle of non-retroactivity of criminal law as well as the principle of legality and the statue of limitations within criminal actions. The allegations stem from Garzón’s decision to respond to the demand of families of the victims to investigate crimes committed during the Franco dictatorship (which lasted until 1975), and the Civil War (1936-39). Spain’s 1977 Law of Amnesty, granted an amnesty for crimes committed during those periods and Garzón’s investigation would have been the first time that such crimes would be investigated in Spain’s history.

At issue in the prosecution of Garzón is nothing less than impunity for such crimes as enforced disappearances, tortures, and executions, which may well amount to crimes against humanity. As Judge Garzón argued in his decision of 16 October 2008, in which he accepted jurisdiction to investigate, the alleged crimes have never been the subject of a criminal investigation in Spain. Under international criminal law, such crimes are not subject to a statute of limitations.

In this view, he has considerable support from international law. Many courts around the world, like the Argentinian Supreme Court or the South African Constitutional Court have repeated the States’ obligations to investigate international crimes, regardless of the passage of time or amnesty laws.

International observers and NGOs present at the hearings made several statements in this regard. Human Rights Watch voiced concerns regarding the intimidation effect for other judges that investigate violations of human rights. Amnesty International described as outrageous the fact that a judge is being prosecuted for seeking truth, justice and the reparation for victims of massive violations of Human Rights.

These are just the latest in a series of statements in support of Garzón. In May 2010, the United Nations Working Group on Enforced Disappearances issued a press release noting with concern the suspension of Judge Garzón by the Spanish Judiciary regulator (Consejo General del Poder Judicial).

But the issues at stake in the Garzón trials are bigger than just the treatment of one Judge. Garzón accepted that his duty was to investigate facts that may constitute crimes under International Law and in effect chose the interpretation that the Spanish 1977 Amnesty Law is in conflict with Spain’s obligations under International Law.

On 31 October 2008, the United Nations Human Rights Committee, welcomed the adoption of Law 52/2007 on Historical Memory Law (Ley de la Memoria Histórica) as a first step in Spain which provides for reparations for the victims of the dictatorship. But the Committee expressed concerns about the obstacles that Spanish victims faced in obtaining truth, justice and reparation. The body called on Spanish authorities to take the necessary measures to nullify the Amnesty Law and to guarantee recognition by the domestic courts of the non-applicability of a statute of limitations to crimes against humanity. Further, it called for the creation of an independent truth commission regarding Human Rights violations which occurred during the Civil War and Franco’s regime, one which would guarantee the localization, exhumation and identification of the victims’ remains, and its restitution to their families.

For the families which petitioned Garzón, this demand lies at the heart of the matter. The trouble is, it also touches on the issue of who caused their deaths.

Also at issue are broader legal questions relating to nothing less than the lawfulness of the Amnesty Law and the interpretation of the principle of legality in Spain.

Next week (31 January) the Spanish Supreme Court will rule on the preliminary questions of admissibility. The decision will be key for the Spanish judicial system and its position regarding human rights protection. The Supreme Court must be seen to transcend the left-right divide and it must not send the message that investigating international crimes constitutes a crime in itself. No judge should be prosecuted for doing so. The effect on human rights protection could be disastrous.

Should the court accept Garzón’s arguments concerning the procedural objections to the way the case was filed, the proceedings in this case would end.

If not, the case will begin proceedings immediately. As Garzón makes clear in this Guardian video released this week, he is not optimistic.