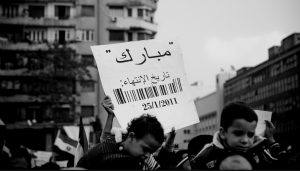 The Laws of Rule blog started before the revolutions in Tunisia and Egypt…but only just. The Arab Spring has given LoR much to write about. No story has done more to propel questions of law – about constitutions, military trials, the role of the judiciary, victims, power and accountability – to the forefront of public consciousness. Here’s a short piece from last year for Egypt which could apply to all those in the region and around the world who decided to take their impatience to the streets.

11 February 2011 – Egypt’s revolution has established that sovereignty rests with the people. This simple yet momentous step has changed the face of politics in the Arab world. The implications are incalculable (for now) but everything depends on whether the movement can keep up the pressure for the protection of basic rights and freedoms that will be the long term guarantee of transition.

Slavoj Žižek put it best in The Guardian

“One of the cruelest ironies of the current situation is the west’s concern that the transition should proceed in a “lawful” way – as if Egypt had the rule of law until now. Are we already forgetting that, for many long years, Egypt was in a permanent state of emergency? Mubarak suspended the rule of law, keeping the entire country in a state of political immobility, stifling genuine political life. It makes sense that so many people on the streets of Cairo claim that they now feel alive for the first time in their lives. Whatever happens next, what is crucial is that this sense of “feeling alive” is not buried by cynical realpolitik.”

Thanks to Egypt, LoR’s Mark Taylor has been “feeling alive” these past three weeks. So much so, he thinks he’s an Arab.

وشكرا Thanks Egypt. We owe you.

PS Click here for more LoR coverage from the past twelve months, including reports from LoR contributors in Cairo and Tunis. You can also check out the tag cloud.