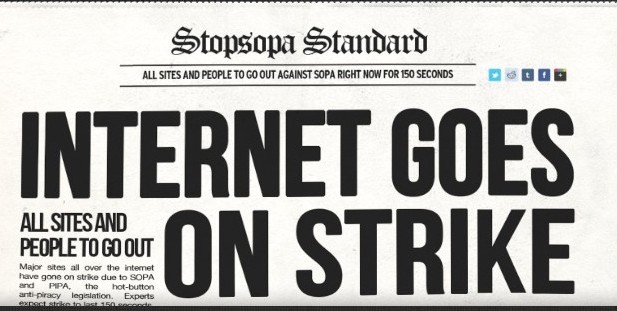 Today’s internet “strike” by Wikipedia, Mozilla, Craig’s List and other sites (the list is long and growing) has raised global attention to the US bills now working their way through Congress, known as Protect-IP. Depending on where you sit, Protect-IP will either destroy the internet or protect against the digital pirating of intellectual property. For a simple explanation of the objections, try out this short video from Fightforthefuture.org.

The claim that innovation will be stymied by new laws attempting to govern the internet is not new. As Copyhype argues in some detail, the argument that the internet sky is falling has been made repeatedly over the years.

But what the proponents of Protect-IP seem to have missed is the very real potential for legitimizing government and corporate censorship of the internet. The specific tools include government blocking of IP addresses, and the ability of the government or private actors to launch law suits or force online payment systems to boycott sites they object to. In effect, Protect-IP proposes to legalize and embed legal tools already used to target political opponents and business competitors around the world, perhaps most famously symbolized by the US attacks on Wikileaks or the attempts to silence democratic opposition movements in the Middle East and China.

Top legal internet brain Lawrence Lessig has argued for years now that that both sides in this debate are “extremist” – one side rejects a common sense, digital age definition of ‘fair use’ (the legal concept that allows you to reproduce but not steal someone else’s intellectual property) and the other which rejects all protections of intellectual property. His is the most even-handed description of the digital copyright fight and is best summarized in this TED conference video from 2007.

Lessig is convinced that the courts and legislatures have failed – and will continue to fail – to find a solution. He is probably right. But it is equally true that the market, if left to its own devices, will deliver freedom of expression only as long as it does not undermine the ability of powerful interests to continue to make a profit. If nothing else, the Protect-IP battle illustrates that the freedoms upon which creativity and political activism depend require legislative protection from the political and economic forces that seek to constraint them, and that those freedoms are probably more in need of protection right now than the rights to property.

So, is it impossible to protect intellectual property on the net? Of course not. But neither government nor the market will do it alone. Lessig has proposed a middle ground, one which no longer criminalizes the creative use of intellectual property and draws a line at the for-profit use (it is more nuanced than that, but he explains it well), but one which requires us all to push political and market forces to accept the reality of the digital age.

Laws of Rule has taken the point: check the bottom of our page. The content here is published under a Creative Commons license, which allows reproduction, with citation, and protects the author’s original copyright.