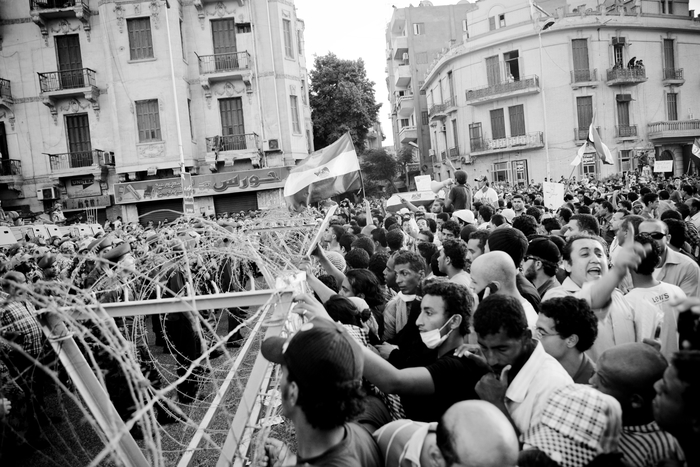 When pro-democracy protesters took to the streets in Egypt in January they targeted the army with a charm offensive. But, as LoR contributor Yasmine Gado reports from Cairo, the struggle over the constitution is exposing an alliance between the army and the Muslim Brotherhood that is threatening to undermine the gains made by the revolution.

Since the fall of former president Hosni Mubarak on February 11, the country’s ostensible transition from dictatorship to democracy has been overseen by the Supreme Council of the Armed Forces (SCAF). The SCAF is composed of the same generals who served Mubarak loyally for 30 years and who preside over a military that controls businesses that amount to an estimated 10 to 15 percent of the nation’s economy.

Critics of the SCAF claim that rather than guiding the nation towards democracy it is acting to preserve its privileges and establish a new “post-revolutionary stable political order based on the creation of a democratic façade for a non-democratic regime.” They believe SCAF, assisted by Islamist forces, is using several means to go about this, one of which is manipulation of the constitutional reform process and the upcoming elections.

Signs of Alignment of SCAF and Islamist Forces

There are indications that the SCAF has reached a power-sharing arrangement with the Muslim Brotherhood. SCAF spokespeople have made several significant statements about the Brotherhood, including a speech to the U.S. Institute of Peace in Washington in which Major-General Mohamed al-Assar, a member of SCAF, said that “day by day, the Brotherhood are changing and getting on a more moderate track.” There also have been discussions between the Brotherhood and U.S. representatives, followed by approving statements by the U.S. State Department: Hillary Clinton said in June that the Obama Administration welcomes dialogue “with those Muslim Brotherhood members who wish to talk with us”.

The Brotherhood’s Supreme Guide, Mohamed Badie, has urged Egyptians to back SCAF and praised its role in protecting the revolution and backing the people, despite the fact that the military has been engaged in torture and other human rights violations, has tried critics in military courts, including protesters and bloggers, has criminalized strikes, protests, demonstrations and sit-ins, and has put striking workers on trial.

In July Islamist forces (including the Gama’a Islamiya, the Salafi Nour Party and the Muslim Brotherhood) began denouncing the secular activists engaged in a Tahrir sit-in that began on 8 July, claiming the protest was instigated by foreign agents who wanted to divide SCAF from the Egyptian people. On Friday, 29 July, the Islamists arrived in Tahrir en masse (many bussed in from various provinces) and blared anti-secular, anti-leftist propaganda from a massive stage, chanted in favor of SCAF and called for application of Sharia law.

Hossam el-Hamalawy, an influential Egyptian journalist and blogger, has written that “the Islamist forces are clearly on the side of the counterrevolutionary generals” and leaders of the Islamist forces are “without any exceptions, in one way or another allied to the SCAF awaiting their shares of the booties in the coming parliamentary elections and constitutional reform.”

Critics of this proposal object to having parliament select the Constitutional Assembly because they expect the new parliament to be dominated by the Islamists (since newer parties have not had sufficient time to organize to compete effectively with them in upcoming elections). These critics want a constitution to be in place before parliamentary and presidential elections. This “election first” versus “constitution first” debate between secularists and Islamists has been ongoing for months.

On 12 July, the SCAF issued a statement addressing demands of protesters that were then engaged in the sit-in in Tahrir, including a statement that a set of constitutional principles would be issued in a “constitutional declaration,” even though the protesters had not demanded it. A few days later Deputy Prime Minister Ali El-Salmi set off a fierce debate when he announced the cabinet would issue a new document in the next couple of weeks containing a set of “inviolable constitutional principles.”

These so-called “supra-constitutional principles” relate mainly to civil liberties and include a provision that Egypt is a “civil, democratic state” that “respects pluralism.” The document also includes criteria for choosing members of the committee charged with drafting the new constitution. El-Salmi has said that after (and only after) various political parties agreed on the document’s contents, the SCAF would issue it in the form of a constitutional declaration.

While several liberal, leftist and nationalist political parties announced support for El-Salmi’s proposals, Islamist groups have strongly opposed any supra-constitutional principles and any constitutional declaration ahead of elections, some threatening nationwide protests. This latest conflict could mark “a turning point” in the relations between the SCAF and the Islamists.