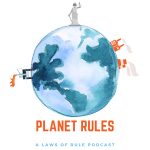 Norway’s climate action lawsuit pits citizens against the government over a decision to open up for oil exploration in the far north. Paragraph 112 of Norway’s constitution guarantees citizens the right to a healthy and sustainable environment. Can citizens invoke that right, in a time of climate emergency, to force the government to reverse its decision? Should the courts be allowed to decide the questions? Planet Rules speaks with University of Oslo law Professor Jørn Øyrehagen Sunde about Norway’s climate action lawsuit, the arguments and the likelihood of a supreme court challenge.

Got a suggestion for an episode of Planet Rules? Drop me a line @lawsofrule on twitter